NOTICE TO WHOMEVER IS CONCERNED

SINCE 3 YEARS AGO,
POETRY PACIFIC PRESS
HAS BEEN ON HIATUS; AND
WILL REMAIN SO UNTIL FURTHER NOTICE.
Posted by poetrypacific.blogspot.ca at 08:29 No comments:

This is to announce that the six bilingual editions of Create Abundance 《创造丰盛》, authored by Zhang Xinyue, have finally been released and become available today!

these are the six editions  ::
1/ chinese-russian;
2/ chinese-german;
3/ chinese-italian;
4/ chinese-portuguese;
5/ chinese-hindi; and
6  chinese-arabian
all translators are from China Translation Corporation (中国对外翻译公司)，each edition carefully proofread by native speakers

For more information on Create Abundance as an institution,
please visit its English website at http://www.gtglobalcorp.com/company.html

Here are the covers and first few pages of the book:: 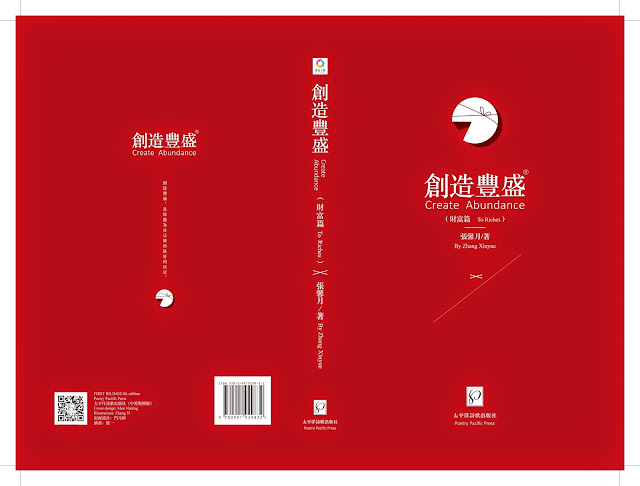 for all those longing to live a life of abundance

Chapter 1 The Power of Abundance

Chapter 5 Decision of the Moment

Chapter 8 Problems Are the Solutions Per Se

Chapter 10The Influence of the Chakras

Chapter 12 Communicating with the Cosmos

HAPPY READING/CREATING!!!
Posted by poetrypacific.blogspot.ca at 07:48 No comments:

for the last three months, we have been fully occupied with our pre-print work; actually we have gone through as many as 4 rounds of proofreading/editing/correcting by 6 translators, 2 editors, and e.layout workers). now the 6 Chinese-Foreign editions -- chinese-german, chinese-russian, chinese-portuguese, chinese-italian, chinese-arabic, and chinese-hindi -- of Create Abundance are finally camera-ready for printing.

in the mean time, we had to switch our contracted printer to another smaller one, simply to accommodate the chinese government policy regarding the printing of foreign material.

if everything goes smoothly, our Poetry Pacific Press will release the 6 editions around the upcoming Xmas time.


Posted by poetrypacific.blogspot.ca at 20:03 No comments:

since i have already published the chinese-english, and chinese-french edition of the book, i am certainly ready to publish the same book in other bilingual editions.

these days, i have actually been trying hard to find a good printer first. as all the copies (10,000 copies for each edition of the six languages) are to be printed and transported to local destinations in shenzhen this time, i have to work with c&c offset printing, one of the best printing companies in china, to find a solution to the problem: according to the chinese government policy, books published by foreign publishers (like our Poetry Pacific Press) have to be transported abroad right after they are printed in china. if we cannot work it out, i will have to use the other much smaller company to do the job, which i worked with to publish another book by the same author last year. it can be much more daring, but it has a lower professional standard, and an even lower 'business practice/personality.'

to my great relief, i have just had the book translated into the six languages by a group of translators who were not only highly interested and qualified but also available for the job. in fact, they are from a national team, china's top 1 or most prestigious translation company (based in beijing).

the specific time for the release of each bilingual edition is not available yet, but it will definitely be out later this year or early in 2017, respectively.
Posted by poetrypacific.blogspot.ca at 09:14 No comments:

Posted by poetrypacific.blogspot.ca at 17:19 No comments:

PP Press is to release a new book in march or april, the first chinese-french edition ...

PP Press will publish this book bilingually, both in french and chinese, so that whoever interested in learning chinese or french can hopefully use it as a 'text' book.

PP Press is now working with one of the best and largest printers in china. we plan to print 20,000 hardbound copies to begin with.

the original chinese version of this book was published by huaxia press (beijing) in 2012 and has gone into the 4th edition ever since. popular as it is among chinse readers, this book is one of the 6 authored thus far by Ms Zhang Xinyue, a highly inspiring and influential spiritual leader who, with a master's degree in world economics, has hundreds of thousands of students or close followers in mainland china, korea, taiwan and japan.

this book is about how to achieve/live an 'abundant' life through spiritual cultivation. as i understand it, such an 'abundant' life is characterized by physical and psychological health as well as materialistic success.
Posted by poetrypacific.blogspot.ca at 08:19 No comments:

This is to announce that the first bilingual (English-Chinese) edition of Wisdom for Abundance 《丰盛的智慧》, authored by Zhang Xinyue and translated by Yuan Changming, has just been released and will become available anytime after 19 September!

- For more information on Create Abundance as an institution,
please visit its English website at http://www.gtglobalcorp.com/company.html


- Here are the covers and first few pages of the book:: 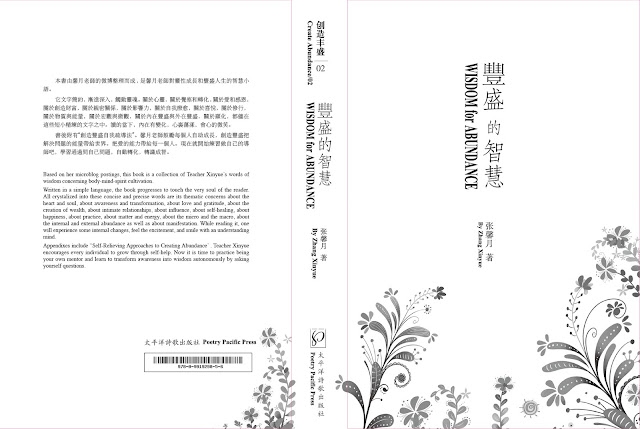 Based on her microblog postings, this book is a collection of Teacher Xinyue’s words of wisdom concerning body-mind-spirit cultivation.
Written in a simple language, the book progresses to touch the very soul of the reader. All crystalized into these concise and precise words are its thematic concerns about the heart and soul, about awareness and transformation, about love and gratitude, about the creation of wealth, about intimate relationships, about influence, about self-healing, about happiness, about practice, about matter and energy, about the micro and the macro, about the internal and external abundance as well as about manifestation. While reading it, one will experience some internal changes, feel the excitement, and smile with an understanding mind.


Appendixes include “Self-Relieving Approaches to Creating Abundance’ . Teacher Xinyue encourages every individual to grow through self-help. Now it is time to practice being your own mentor and learn to transform awareness into wisdom autonomously by asking yourself questions.

as i am to stay between now and the end of october in my native place in china where i have no internet access, Poetry Pacific Press, as well as Poetry Pacific will take a vacation until then.

with all best for a great golden autumn,

Posted by poetrypacific.blogspot.ca at 15:02 No comments:

poetrypacific.blogspot.ca
YUAN CHANGMING grew up in a remote village, started to learn the English alphabet in Shanghai at age 19 & published monographs on translation before leaving China. With a Canadian PhD in English, Yuan currently lives in Vancouver, where he has worked as a tutor, translator & publisher. Credits include ten Pushcart nominations, Best of the Best Canadian Poetry: Tenth Anniversary Edition, Best New Poems Online and publications in more than 1500 literary outlets across 42 countries. ALLEN QING YUAN, born & brought up in Vancouver, is a 2-time Pushcart & Best of the Net nominee as well as the author of Traffic Light. Since grade 10, he has had poetry published in more than 70 magazines across 16 countries, including Cordite Poetry Review, Literary Review of Canada & Spillway. Recently Allen graduated from the UBC Sauder School of Business.